The following picture books were purchased with a grant from CKNW Orphans’ Fund in the spring of 2015. Each book was selected based on how well it illustrated one or more of the five domains of the Heart/Mind Well-Being: Getting along with others, Being alert and engaged, Feeling secure and calm, Solving problems peacefully, and Being compassionate and kind. We suggest you go to www.heartmindonline.org for more information on Heart-Mind well-being.

While the following list organizes the titles by the five domains, each title could easily fit into one or more areas of the Heart/Mind Index. These titles are also a natural fit with the rest of our curriculum collection which features resources supporting anti-bias education, multiculturalism and diversity. Early Childhood Educators and others who support parents and children in their work are welcome to borrow from our special collection—we look forward to meeting you at the WELL.

Books About Getting Along With Others

Books About Being Alert and Engaged

Books About Being Compassionate & Kind 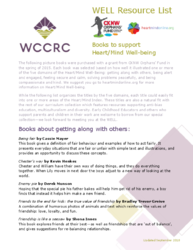 Stay Up-To-Date With The World Of Child Care. Sign-Up For Our E-Newsletter